Idia Aisien Stars on the cover of Aura Magazine 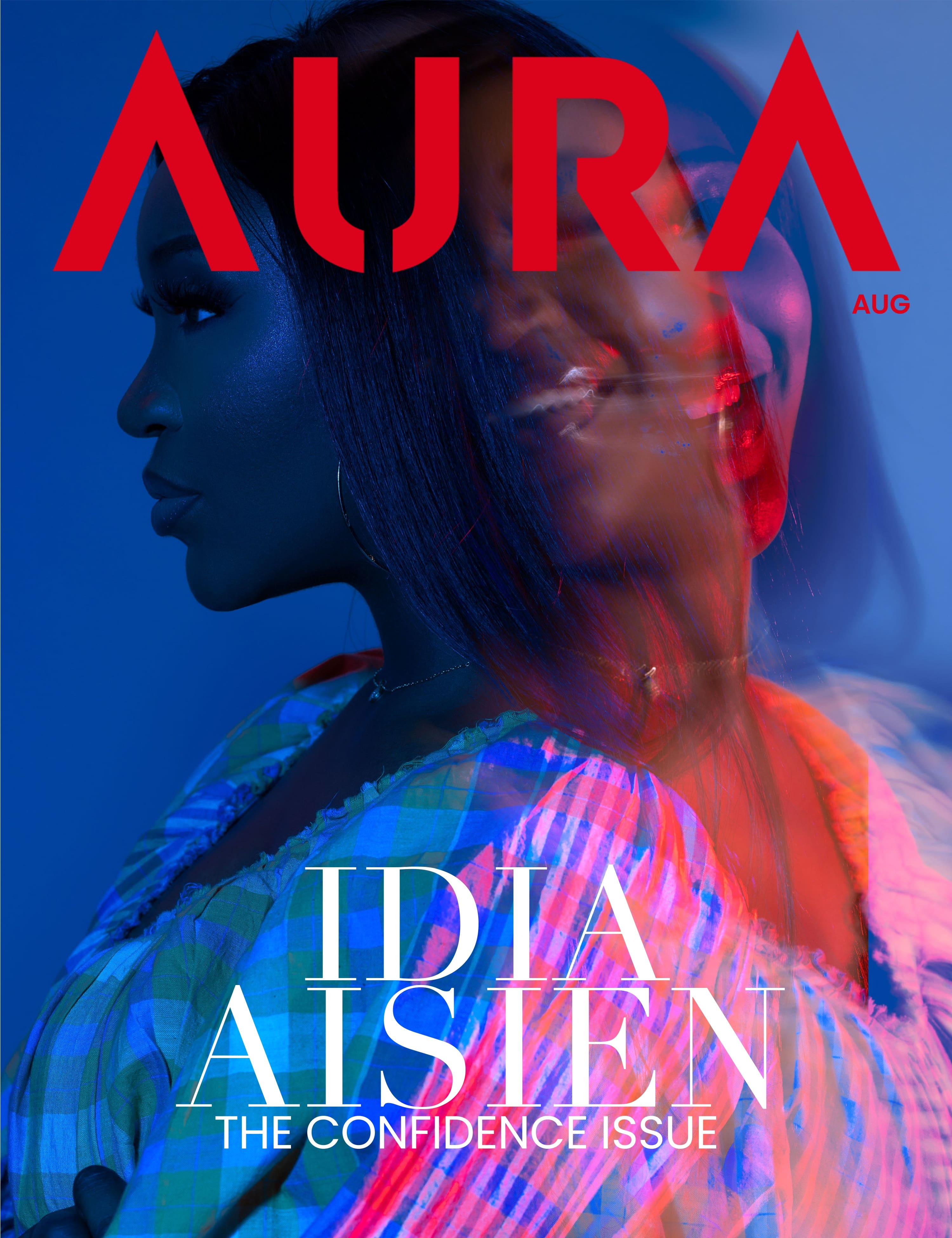 You might recognize her from her shows on Spice TV and Arise TV, or on social media platforms like Instagram, where she shares glimpses into her life as an actress and influencer. However, aside from the glitz and glamour, a facet of her personality you may not get to see often is a strong woman who is goal-oriented and deeply passionate about giving back to humanity.

"I had a really big opportunity but I was too young for it. Not too young, but I thought I wasn't ready or prepared for that opportunity. That was the IDIA Project. It was something that could have changed my life, but it also had a huge impact on so many things. However, when the project came, I kept thinking something big needed to happen," she says. “In hindsight, instead of trying to wait till everything was perfect, I should have launched it earlier.”

The major goals of the IDIA Project are precise: To eradicate poverty, promote sustainable growth and development, integrate Africa into the world economy, and accelerate the empowerment of women, men and children by telling the other half of Africa's story. For Aisien, genuinely telling the other half of Africa's diverse story while juggling a budding acting career and being a social media influencer can subsequently get overwhelming. "Sometimes, you just have to start from where you are, and I always made it seem like I wasn't scared of failure. People think I just wake up and have a plan, but what they don't see is that fear has stopped me from doing a lot of things. There are so many things I've invested in, but I'm always scared to announce."

Over the years, multiple studies have shown a strong connection between heavy social media usage and an increased risk of anxiety, loneliness, self-harm, and even depression. Despite the global impact of mental health conditions, people still find it hard to open up about these struggles and seek help; especially public figures.

In 2016, Idia Aisien sat with mental health experts on Spice TV's 'You Got Issues' and she got them to discuss practical recommendations for dealing with friends hiding depression due to the fear of stigmatization. With over seven years spent in the entertainment industry, Aisien is coming out and speaking candidly about her battles with anxiety. "I create so much content according to people online, but what you don't see is my phone. I have so many videos and pictures on my phone that I don't even post because every time, I think people are not going to like or accept it. It's hard because I feel everything I'm doing is not enough," she says.

"I posted a photo some time ago, and it got so much traction and people were messaging me. I checked my analytics insights on that particular photo and I was like, how? I was scared to post that picture for two weeks because I thought it was not good enough.”

“And I think that the pressure we put on ourselves also affects us so much that we don't realize just how much progress we are actually making. It shouldn't be about engagement, it's always about me just living my life. But all of a sudden, recently, I feel so overwhelmed and everything seems to be about engagement." When public figures and social media influencers speak out about their share of mental health struggles, it can help inspire people to be more vocal about their experiences and further disintegrate the harmful stereotypes about mental health concerns. "A lot of people act like they don't know this, but I know that there have to be other influencers that go through the same anxiety from time to time.”

Every single milestone Idia Aisien has achieved in her career has been as a result of her hard work. Unlike other some other “rich kids,” she never relied on her family’s social standing to succeed. She has to put in the work required to get her to where she is today. At a stage in her career she initially dropped her famous surname to avoid distractions, and only re-added the name, after paving a path for herself, at the tender age of 15, Aisien landed her first modeling job at a UNICEF charity fashion show in Lagos, Nigeria. She has also graced the catwalk for African and US-based fashion designers ranging from Lanre Da Silva to Samantha Pleet and Maki Oh, just to name a few.

Being famous in today's contemporary world, means you have to live up to people's expectations, you don't get to live a rather regular life, you're being judged every day for everything, and to some extent, there's the problem of invasion of privacy.

"The pressure is not in terms of trying to keep up. The pressure is when you start something at a really high level, trust me; you don't want to regress from that level. You are pressured to be the best, and you're placed in a league to compete with the best. It's not as if we're trying to get ourselves known or we're trying to establish a name. Nobody cares what you were, people care what you are NOW.  Are you on top? Are you doing well? Are you successful? You constantly go to bed with these thoughts getting caught up in your head,” Aisien says.

Last year, she made her acting debut in Play Network Studios’ thrilling and exciting remake of the classic 1994 film, Nneka the Pretty Serpent. The film, since its release, has garnered lots of positive reviews in the press.

Aisien describes the whole experience as 'unbelievable.' Oftentimes, celebrities will share these experiences with their fans and detail how joyful they are to be part of a project. This can be fun, glamorous, and fabulous, but also hectic. They are constantly jetting across the country to attend to rigorous auditions, filming schedules, influencer gigs and more. So it's no shock that sleep becomes less of a priority.

"To be honest, during the day, I really can't do anything. You're going to get those calls for work-related opportunities. So, I just suck it up and do what I have to do. But then at night, when I'm supposed to be sleeping, that's when I want to relax, since I have worked so hard during the day.

From 10 pm, I can say I want to watch Netflix cause that's one of my favorite things to do or read a book. But what that now means is that I'm not really sleeping," she says. "So I get to sleep for like two hours maybe…even on weekends."

While young people idolize celebrities and persistently chase the celebrity culture, Aisien advises, "Just be prepared for the work. There are so many things I know in my heart that I wanted to do, but when you actually see the work in front of you, it's madness. When you enter a TV station, and you understand the madness, and the deadlines, and the politics, or you shoot a movie where you're stuck in a camp and you can't talk to anybody, you're having training…when you get in front of the work, just be ready."

"I think the most important thing for anybody to do is to take out time for themselves and do a lot of work on themselves. If you're not right with yourself and you get into this game, you can run mad. You need to have a certain level of mental strength; otherwise, you'd put in so much work and still feel like you’re not good enough.

“Also, be content with who you are, because if you're not, that's when the comparisons get to you, and then the depression comes in. It's all about substance; people can tell when you fake it. Young people need to focus on the inside before they focus on the outside."